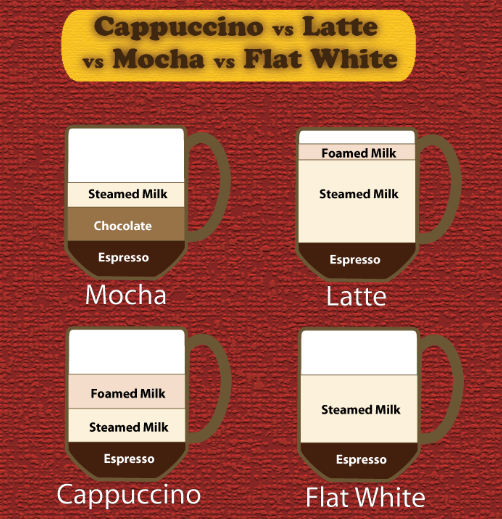 Differences between Latte and Cappuccino

Cappuccino and latte both have three principal elements. These two types of coffee drinks include espresso shots, steamed milk, and milk foam. The following are some of the differences between latte and cappuccino in terms of these three ingredients:

Espresso in Latte and Cappuccino

Espresso shots are strong black coffee shots that are made by passing steam through ground coffee beans. These shots are extremely rich and concentrated and usually for both lattes and cappuccinos one shot of espresso suffice. These coffee shots are placed at the bottom of the cup or mug in which the latte or cappuccino is made for the customers. The difference between cappuccinos and lattes is that in lattes the espresso shot is the 1/6th of the overall drink whereas in cappuccinos it is 1/3rd of the drink.

In coffee machines, milk is exposed to high pressured steam and the milk gradually becomes foamier as steam passes through it. In lattes, steamed milk is a major aspect of the drink in comparison to cappuccino. Steamed milk in lattes comprises of 2/3rd of the drinks and in cappuccinos, the steam milk comprises of 1/3rd of the drink. Lattes are a predominantly milk based drink and more popular with people who like creamy and milky coffee with more milk and a milder concentration of coffee. Steamed milk is usually the hot portion of the coffee drinks and is not as foamy as milk foam. It also includes some foam in it as steam that passes through the milk creates a little foam.

The third ingredient in lattes and cappuccinos is milk foam. Milk foam is also called microfoam which is made by passing steam through milk creating creamy and foamy milk. This looks like foam of cream on top of many different types of coffee drinks. Many espresso-based coffee drinks are all topped up with milk foams. In lattes, milk foam is usually 1/6th of the total drink as steamed milk is a more important ingredient in lattes. In cappuccinos, milk foam plays a more important part as cappuccinos are a more foamy drink in comparison to lattes. Cappuccinos generally have milk foam as one-third of the total drink as cappuccinos have to be foamier than lattes.

Types of Lattes and Cappuccinos

The differences between cappuccino and lattes also include the variants that are available in the market. Latte is a very European style of coffee drink which is popular in western European and Scandinavian countries. There are many different types of lattes which include iced lattes, flavored lattes, plain lattes, caffe latte, skinny lattes, and caramel dolce lattes to names a few. Small lattes, chai lattes, and mocha lattes are also popular in some coffee shops. Cappuccino variants are very different from lattes variants that are available in the market. The variants available in cappuccinos include iced cappuccinos, cappuccino Chiaro, cappuccino scuro, dry cappuccino, wet cappuccinos, and mochaccinos which are mocha cappuccinos. Cappuccinos are coffee drinks that have originated in Italy so many of the names of these drinks are Italian.

Types of Cups Used to Serve Lattes and Cappuccinos

Different cups and utensils are used to serve these coffee drinks. Lattes are served in glasses and saucers, in bowls, in large ceramic coffeehouse cups, and sometimes lattes are also served in milk glasses. Cappuccinos are served in large ceramic cups in coffee houses. They are also served tea styled in cups and saucers in different coffee shops on the planet. Both lattes and cappuccinos are served in coffee cups with lids when they are taken on the go but the size of the cup for lattes is different in comparison to that for cappuccinos. Some baristas make designs on top of these drinks in many stylish coffee restaurants and these designs are generally different for foamy cappuccinos in comparison to lattes.

How are QR codes integrated in food label layouts today?

How to treat food poisoning.